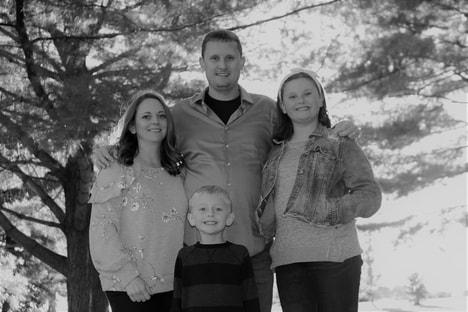 Trenton Cruse - Lead Pastor
Pastor Trenton Cruse has been involved in ministry for over 23 years. During that time there has been a lot of preparation to get him to where he’s at now. He personally believes we should always be striving to do better, and if we ever feel like we have reached a point where we can’t learn anymore, then it’s time to get back to basics; because there is always something to learn.
He has been married to his wife Ashley for 17 years, and they have two children: Jazmin (13) and Jesiah (7).
Over the course of his ministry he has served as an Associate Pastor in two different churches, preached in several revivals, served in youth ministry, worked with preteens, recorded Contemporary Christian and Christian Hip Hop music, and has been actively involved in other ministries to help God’s purpose go forth  and see lives changed.
He has a Master of Christian Studies and Bachelor of Science in Organizational Leadership from Union University in Jackson, TN; and an Associate of Arts in General Studies from Shawnee Community College in Ullin, IL.
In early 2012, God gave him a vision for a church that simply started as a drawing. He moved to Jackson, TN on August 10, 2012 to finish his degree at Union University, and lived there until October 28, 2016. After completing his degrees, he and his family felt it was time to move to Jackson, MO and begin preparation for the church God had given him to plant. Trenton’s vision has been a long time in the making, and we are excited to see what God is going to do through Next Level Freedom Church not only in Jackson, MO; but around the world.​

Bret Hileman - Associate Pastor
Pastor Bret Hileman has been involved in ministry for over 20 years. Over the course of that time, Bret has served in various positions in the Body of Christ. Early on in his ministry he felt the call to preach, which led him to a position as a youth pastor. He has been involved in youth rallies and a Christian Hip Hop group. After serving as youth pastor, Bret was ordained as an Associate Pastor in 2012 at Covenant Life Church, where he served faithfully until he felt the call to help Pastor Trenton Cruse fulfill the vision of Next Level Freedom Church.
Currently Bret is serving as Associate Pastor in the church by preaching and teaching the Gospel of our Lord Jesus Christ.
Bret has been married to his wife Affton Hileman for 16 years and they have two wonderful daughters; Tayla (12) and Ella (6).
Bret's hope for the future is to truly see the body of Christ go to the next level with God. He hopes to help people realize that a relationship with Jesus is the only way to truly be free.
With a willing heart and an eagerness to serve; Bret looks forward to seeing what God has planned for him here at Next Level Freedom Church.

​  It is our vision here at Next Level Freedom Church to establish a community of believers that are unified even outside of the church setting. We believe relationships should not be limited to the four walls of the church on Sunday mornings; they are to be built in such a way that even when we are not in church we can help lift one another up.
This is why:

“Our mission is to effectively lead a generation of believers to a closer relationship with God through discipleship training, athletics, entertainment, business, family, and in all walks of life. This will be accomplished by giving people the opportunity to freely worship God through the exercising of their gifts, and effectively sharing Jesus Christ with others.”

Our mission statement can be summed up into 5 words: “​Reaching Others Where They’re At”, which is our vision statement here at Next Level Freedom Church. We value people, family, worship, and empowerment. These are all things we see as important as you walk out the journey God has for your life.

(For more information on Our Journey, check out the "​Our Journey" page here on the website.)